I’ll be working with kids twice a week for six weeks this summer. Today’s group was five year olds. I came totally prepared to do numerous projects. I’ve made a list of my priorities. We’re going to do paper folding with a focus on squares, explore symmetry, play games, make patterns, look at books and think about numbers.

My suitcase of supplies was totally full. And mostly went untouched. But what we did get to today felt fun and worthwhile. Actually I know if was worthwhile because I heard one of the 5 years-olds explain to an adult that we made a house out of a square! Was so happy to hear that remark, as what I’m emphasising with the paperfolding that we are doing is that we are transforming shapes. I get to use the names of shapes, as well as words like rotate, middle, bottom, and I get to teach folding skills.

This house project is adorable. House on the front, pocket on the back, and only a few folds. Start with a square, make a triangle, then create a couple more triangles (see photo above) and you’ve got a house. The pocket in the back is to hold pictures of yourself and your friends. which, of course, you draw.

This was a great project for me to start with. Touches so many of the ideas I want to talk about.

The time flew by. I worked with two groups of great kids.

Then my time was up. Time to pack up.

I packed up, but was a bit disappointed.

I had wanted to do something with numbers. But it was time for the kids to have time to free play.

So I did what something I sometimes do when I want to do a bit more with kids.

I sat by myself and started working all by myself, in this case I was coloring in numbers for a project that I will write about next week.

I really  wanted the kids to help color in 40 different numbers. That’s a lot. But I just started all by myself.

Got nearly all the numbers colored in. We’re going to make a special deck of cards to play a game that Kent Haines wrote about.

Which will be a story for next week. 🙂

I wanted to transfer this image to a big piece of paper. Way too big for my printer. It’s just under 24 square inches.

I made the pattern with the intention that it would fold into two cubes. BTW, I recently learned that the correct term to use here is net:” A pattern that you can cut and fold to make a model of a solid shape. This is a net of a cube.” (quoteth from the internet)

While I was scheming how to break the net into prints that I could piece back together, it occurred to me to just overlap the artboards in Illustrator. Set them up to be negative one inches apart. Here’s a snip of what the Illustrator workspace looked:

All I did, after setting up the six artboards was to overlay my net onto the artboards. No figuring, no scheming, just laid it right on top. Honestly I didn’t know what would happen. Would the overlapped parts not print? Just didn’t know.

Amazing. Everything printed everywhere. What I mean is that the parts of the image that were on the overlap printed on both papers. This made it really easy to piece together. Of course the best use of this technology is to print Happy Birthday banners. But what I did was piece them together, cover the back of the paper with blue crayon, and, using a ballpoint pen, trace over the lines to transfer to my larger paper.

I didn’t take any more photos of the process, but here’s my fully cut out net.

The blue crayon showed up just enough, but what was really great is that the force of the tracing created score lines, making this easy to fold.

Here’s the cube. Hard to imagine how that image becomes these two two-inch cubes. So I made a video:

Here’s something that can only be described as playful.

It’s four squares, which have been folded into eights, like an 8-cut pizza. I made this as a sample book when I was teaching the Book Arts at Bancroft series of classes at the Bancroft Library here in Salem.  I would teach eight classes in the fall and eight more classes in the spring, to groups of 3rd and 4th graders. I did this for ten years. It was a really great program, funded by New York State Council on the Art Decentralization Program.  No one was in charge of me so I did whatever projects I felt like doing with these kids. This was when my own children were as young as they come, so this book arts program kept me thinking about the arts at time when I would have otherwise been thinking only about laundry, meals and bedtime.

This way of folding squares and then just connecting them together is an idea I came across during a day that I passed at the Patents Office in NYC long ago, before the internet. I’d go up there now and then,  into this great cavernous room on the west side of Manhattan and just looked through cool stuff. I’m pretty sure that this way of folding was in a folding toy section, patented by a woman from Israel. There were some great drawings with the patent (which I copied and probably still have). 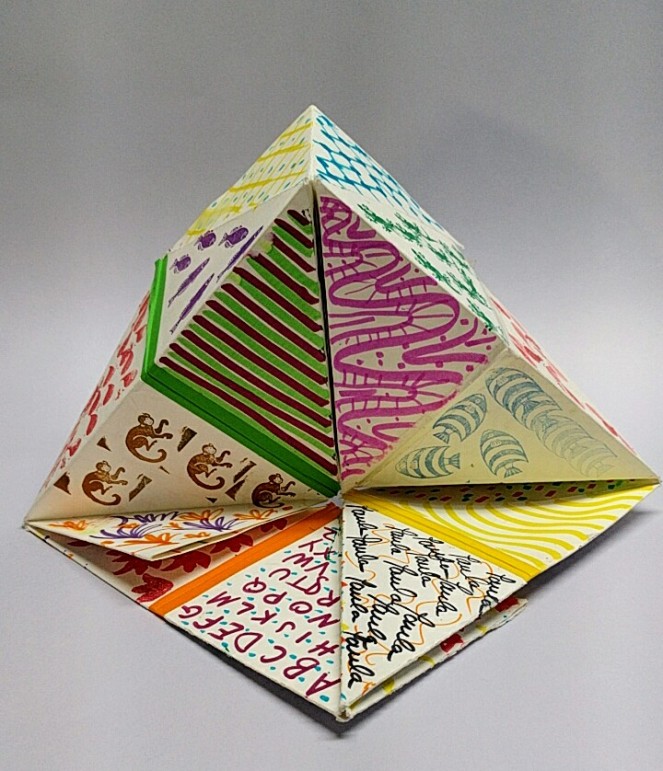 When I did this with kids during my book arts workshop I was aware of one big obstacle: There are 64 distinct areas to decorate. Since the charm of this structure is finding all sorts of different configurations to display it in, it seemed to me that the patterns should be varied on each facet. But, 64? That’s a lot of designs. I had the kids for 90 minutes. Could they fill the papers? How could I facilitate this?

We spent the first 25 minutes making the structure. 65 minutes left. 64 areas to fill.

What I did was prepare 64 notecards, each with a different design. The children sat in a big circle, each with a  marking tool. Each note card had a different design suggestion on it. Kids were not bound by my suggestions, but they would have only about a minute to decorate one of the triangular areas, then they would pass their marker and note card to the person to their left and receive a new suggestion and marker.

I’m usually not so regimented with my classes, timing things in short intervals and making commands, but this time it was great fun.

So, got that? Four squares folded pizza-style and linked together and decorated. Then filled with designs.

Be sure to click on the image tab at the bottom of the patent link if you are still unclear about how this structure is constructed.

I’m happy to say I still have my paper copy of this patent, which I printed up at the NYC patent office about 30 years ago.