These five year-olds that I am seeing once a week this summer keep exceeding my expectations. I’m trying to engage them with relevant, age appropriate concepts, but they mostly seem to be at least one step ahead of where I expect them to be.

They will be starting Kindergarten in the fall. I am not expecting that any of them can read anything. I made this castle like construction for them so that we can play around with spatial relationships. This construction of mine has one low wall that bears the label “over”, which I wanted kids to look over. H promptly climbed over it bending one of the merlons, which made me complain. But H retorted, “but it SAYS OVER.” Grr. 5 years old.

What my thought was, for this past week, was to get the kids to pose with my castle/book such that they are acting out actions in 3D space.

I’m relying on this research https://www.greatschools.org/gk/articles/how-to-teach-shapes-and-spatial-skills-to-your-preschooler/    which says

“Clement, a professor at The State University of New York at Buffalo and co-author of Learning and Teaching Early Math, advises parents to use shape and space words, such as behind, under, deep, last, backward, triangle, and corner, in your daily interactions with your young kids. According to Clement, by saying things like, “Look, I cut your cheese sandwich into triangles,” and “I hid your shoes behind the sofa; can you find them?” you’re “mathematizing” your child through daily routines.”

The time goes so fast in these sessions. I think about ways to leverage our work/play so that it  resonates  To make the most out of our time together, what I am doing is taking photographs of the children posing with the castle, with the shapes, and with each other, then slide the images into Photoshop to create coloring book pages.

I will make copies for the kids, with a simple binding. Haven’t done this coloring book kind of thing before. Hope it works out. So far, it’s pretty adorable.

I’ve been on a quest to explicitly tease out the connections between bookarts and math, This is the third summer I’m with groups of children who will be entering kindergarten in the fall so it was fortuitous that I saw this article https://www.greatschools.org/gk/articles/early-math-equals-future-success/ about things to think about when doing projects with the very young. The fact that Graham Fletcher gave it a thumbs up encouraged me to read this article carefully.

Am I looking too much at the fact that a Clements is supporting a Clements? Nonetheless Nicole….the article is spot on and thanks for sharing.

The first thing about the article that caught my attention was that “math gets an average of only 58 seconds per day.” in the average pre-school and kindergarten classes. So, even though I get only an hour a week with each of the groups, this time may actually be meaningful to these kids.

Here are a few ideas from the article that I am working on addressing:

I had just come across a great way to make a paper bag, a way that seemed just right for the very young. During my first session with the kids we made these bags out of newspaper. You can see them in the first photo of this post. We’ll  makes more of these bags the next time I see these kids, but next time I will use prettier papers.

The key things I want kids to actually SEE is:

We did talk about numbers, and did some counting, but we didn’t do rote counting. Instead, all the counting we did was related to counting ourselves. There were 10 children and three more. First we counted the children, then I asked them to guess what number we’d get if we included everyone in the room. It was fun to hear all their answers. Some children were “right” but I made sure to tell all the kids who weren’t “right” that all answers with are important because they are all on the path to the truth.

I have a thing about number lines. When I can figure out a way for the kids themselves to arrange themselves into a number line, well that’s the best. For this first time I let them arrange themselves by whatever means worked for them. They don’t all know the numbers, or understand this arrangement but, I found out that most of these kids know their numbers. The next time we do this I will intervene by asking them to use words only, rather than words that rely on gestures, to arrange themselves. Doing this aligns with the article I mentioned above: “ Clements urges parents and teachers to teach kids what he calls the “Language of space” – words like front, back, behind, top, bottom, over, under, last, first, next, backward, in, on, deep, shallow, triangle, square, corner, edge, etc.”

I never know how much we can do in a session, but I’m hoping to make this little four-page counting book with the kids: more spatial practice, more practice with the ability to “… identify the number of items in a small group”, a way to have a conversation about shapes, and, yeah, I just like making books with kids.

There are more things I am thinking about, will be thinking about with these summer projects, but now I have to get back to work prepping for tomorrow’s class. 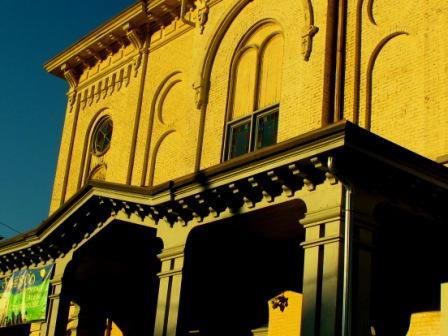 Yesterday evening I slipped in to Old Washington County Courthouse in Salem, NY, through the back door, for a sneak peek at the BooksInBlack show that opens this evening. I didn’t exactly break into this former jailhouse: There was a Kung Fu class going on downstairs, so I knew that back door would be open for exactly 75 minutes. Earlier in the day I had entered the Great Hall of the building through the front door while Ruth Edwards, Gail Bearup, Mary Kilpatrick and Ed Hutchins were setting up the show. The artists’ books were so compelling that I made this plan to come back in the early evening when I could have the room all to myself. 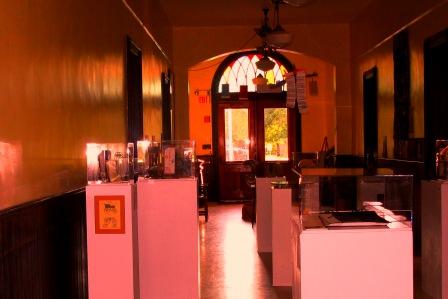 This is a show of many layers. There’s the art layer: these books are visually exciting, just what I like, an intriguing blend of graphic and sculptural elements. The work shown here is full of celebration and whimsy. Additionally, it’s a well-researched show, full of history and copies of historical artifacts seamlessly integrated with the artists’ contemporary response.

I had a field day, taking photos of the work with no one around. It had been my intention to post these pictures this morning, but, after thinking about it, decided that it was good manners to first wait for the show to open. 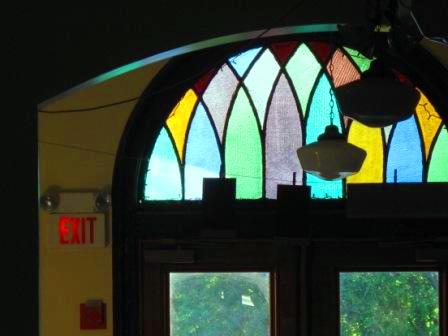 So I left, and will return this evening at 6 pm sharp. With my camera.