This blog became public six years ago today. I had been writing in secret for a while, trying to get the hang of WordPress, before first hitting the Publish Public setting. To celebrate, I’m posting photos of work done by each member of my little family, and pointing out my most visited pages.

The images on my blog that have gotten the most clicks are:

How to Make an Origami Pamphlet : 3750 clicks.  My number one favorite book to makes has the most clicks. This elegant little structure is known also know as a  zine, hot dog booklet, eight page pamphlet as well as by many other names.

Origami Pocket Tutorial:  3647 clicks.  This is slightly different from an origami cup because it is sized to hold a little book.

How to Make a Six-Sided Snowflake from a Paper Napkin: 2859 clicks. I made this image quickly one evening after trying to explain how to do this on the phone to my good friend Cynthia in Minnesota. There are so many tutorials on how to make a snowflake that I never thought mine would rise to the towards the top of google search results, but it has!

My most visited posts are:

‘Tis the Season to Make Paper Snowflakes    34,689 visitors. These views are mostly seasonal.

How to Make a Paper Spring  14,164 visitors. There’s not much competition on search engines for this structure. Even so, I think that the tutorial page on this post is one of my best and I doubt anyone will make one that’s better. Blush.

How to Make an Origami Pamphlet  13,674 visitors. This post, by the way, was published 10 days shy of six years ago. Nearly everyday this post is visited. Yesterday it got 16 views.

So, that’s it, my six-year wrap up. Next year maybe I will write about my own favorite posts. Thanks for visiting. It means the world to me to know you’ve stopped by.

Addendum, 2016: This page has gotten about 35,000 views so I’ve decided to update this post with a slightly better set of directions on how-to-make-a-snowflake than the tutorial page further down in the this post. I’d be grateful to know if you’ve found these directions helpful.

This evening I tried, through two thousand miles of phone wire, to explain to my friend Cynthia how to make a six-sided (six-pointed?) snowflake using dinner napkins. I failed. So here are the directions, with visual aids.

Begin wiith regular dinner napkins. These are just about always square, folded into fourths. Perfect. Also, get a pair of scissors, and have at the ready a triangle that has at least one 60 degree angle on it. An equilateral triangle has three angles that measure 60 degrees, so this is the best one to use. And where can you get this triangle? Well, right here.

Print this out then cut it out.

Next, open up a napkin so that it is folded in half instead of fourths, From the middle of the folded edge, fold the bottom up 60 degrees. To get just the right angle, use the 60 degree triangle, placing the point of the triangle on the bottom of the middle fold on the napkin. See the picture below. 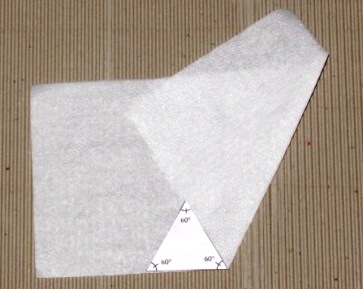 Now here’s how my snowflakes looked after I made cuts.

And here they are hanging on my front door.

If you want to attach snowflakes to a window in such a way that the tape doesn’t have to be scraped off, use Scotch Magic Tape. This is the only tape that I have found that comes off of glass when you want it to come off.

Addendum! If you want your snowflake cutting to make more sense, take a look at https://bookzoompa.wordpress.com/2014/12/02/paper-snowflake-cutting-tips/