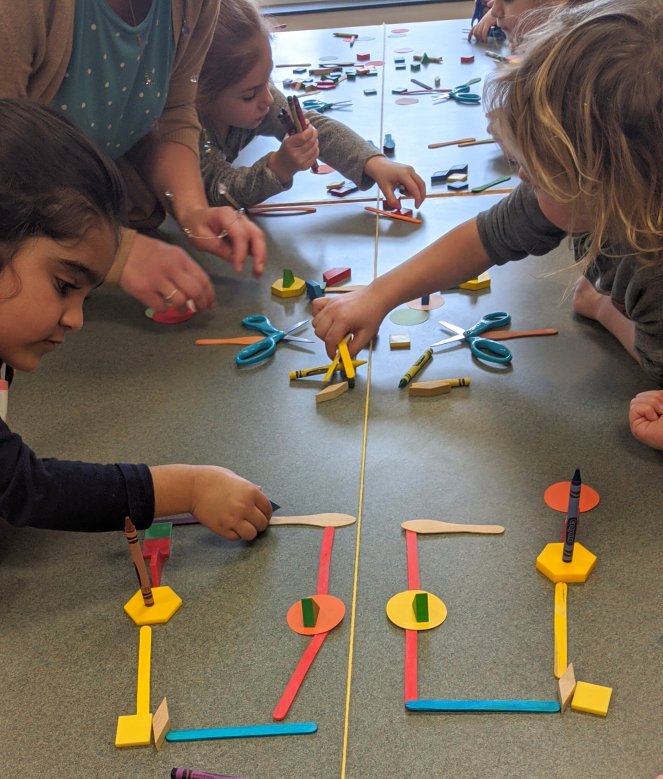 Where I left off in my last post was young children making lovely symmetrically reflective arrangements.

Where I am taking you from there is how to understand, through the lens of symmetry, why multiplying two negative numbers together makes a positive.

Not being able to visualize this has been a chronic thorn in my side.

He didn’t mention symmetry by name but he did talk about reflection, so, yeah, symmetry.

Above you see reflective symmetry. created by a couple of young children.  (Please think of the shades of greens as just green) They reflect across an imaginary line.

Now think of a number line, one which includes negative numbers. It’s the same idea as visualized above. except now it’s the numbers that are reflected. The negative just indicates which side of zero the numbers are situated.

(Just to let you know, this is not something I am making up on the fly. Mathematicians often look at numbers as their distance away from zero, sometimes referring to this as the number’s magnitude, or its absolute value. This is not something you need to sort out, I just want you to know I’m not making this stuff up.)

So what does this have to do with multiplication?

When multiplying, what the negative sign does is that it REFLECTS the quantity across the zero.

Now, what happens, visually, when just one of the numbers in our problem is wearing a negative sign?

In this equation, negative three times two, I’m first thinking as three times two because that’s the distance from zero that this equation is expressing. So, again, I get six BUT NOW, because there is a negative sign, that’s my signal to reflect the product (6) over across the zero line.  Multiplying by a negative does this: it reflects across the zero line.

Now, what about if there are two negative signs in the multiplication problem?

I shouldn’t gush over my own posts, but this particular one, is one I am so excited by because it’s something I’ve failed to visualize for such a long time.

Many thanks to David Wees.

This is the section from his post that turned the light on for me:

One thought on “Symmetry and Multiplying Negative Numbers”