There’s a hidden box layer in the Zhen Xian Bao.

It can be thought of as the third layer of this structure, but that can be a bit misleading, as there can be numerous layers of the masu-type box above it.

Many of the directions I’ve seen for this layer include templates so that you can make simple cuts and folds then do some gluing to create the box. I have nothing against templates (well maybe I do…) but the fact is that the template makes  a box that is not nearly as elegant as this origami folded box.

However, if the maker is using paper which is like those made in workshops in the Shiqiao Village, then using a template might make more sense, as it appears to me that  using a hardy paper with the origami method would make an overly bulky box.  In any case, whatever method you use is your decision. That’s what’s so awesome about the Zhen Xian Bao: there are lots of personal decisions to make.

At the end of the post there’s a video on how to make this box. There’s some key points that I want to emphasize here. The first is that this box is made from a square. If you want the rectangular tray to fit exactly under the boxes above it, which is what seems to be typical, then you must  start by first making  the boxes of second layer .  The width of three of these boxes will be the side measurement for the square. Measuring by using the actual boxes is the only way to go, as different weight papers used for the masu boxes will yield different slightly different measurements. There is no purely numeric way to do this. You need to measure using the actual boxes.

Once you have the correctly sized square, the next step is to fold the square into thirds. Not halves, which is easy, but thirds, which is tricky.

Maybe not so tricky, though. After all, your masu box should be right there with you, and the width of the box is a third of the square, so just line up these boxes on the edge of the paper and fold the far edge to them.

Then fold the other edge to the fold you just made and the paper is folded into three equal sections. Yah!

The two outer thirds will be folded in half again…and this is the last of the pictures of the process. The video at the end of this post to show how to make this, from beginning to end. If I make a one-page tutorial on this, it will eventually show up in my blog. 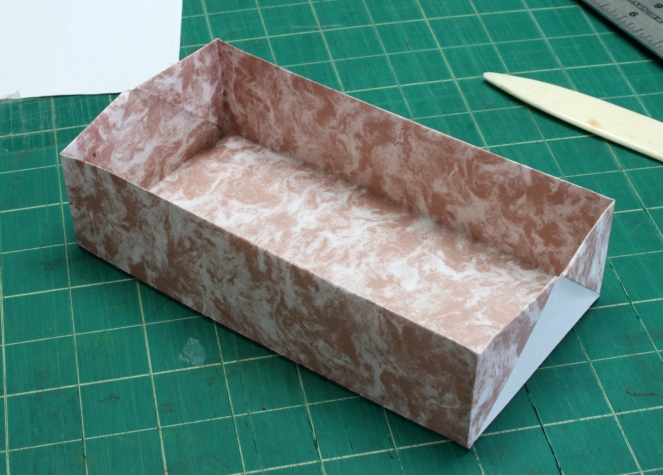 Here’s that box, with another next to it, hidden under two masu boxes.

Lifting up the masu boxes reveals the rectangular tray below. You can stack many rectangular boxes for more surprises.

The video of the making of this box: